Today we are going to look at the Top 5 cameras that YouTubers use for vlogging these days. These cameras are used by some of the top YouTubers like Casey Neistat, PewDiePie, MKBHD, Roman Atwood, David Dobrik, KSI, fouseyTUBE, Zoe Sugg, FunForLouis, Aspyn Ovard, and others. All these YouTubers have millions of followers and billions of views. They are creating their awesome content with these cameras. If you want to start a vlog, then try your hands with any of these cameras to start your YouTube channel.

Vlogging is becoming more and more popular every passing day. There are so many vloggers who have become international celebrities in the last decade. Vlogging is now considered a viable career and there are hundreds if not thousands of vloggers who are making a living through their vlogging income.

What Camera do YouTubers Use – Top 5

Canon G7X Mark II is one of the best vlogging cameras out there. It is used by PewDiePie, Logan Paul, Roman Atwood, Zoe Sugg, MyLifeAsEva, Alex Wassabi, Tanner Fox, Mark Dohner, Lance Stewart, fouseyTUBE, Alfie Deyes, LaurDIY, Aspyn Ovard, and more. These are top-level YouTubers and they are creating content on a daily basis. They have tried many cameras and finally found this perfect camera which helps them to create high-quality vlogs easily.

The Canon G7X Mark II is a compact camera often used by daily vloggers because it is portable and pocketable, it’s easy to vlog with throughout the day. It has a 20.1MP sensor and it can record up to 1080p (Full HD) videos. Full HD is the standard for uploading videos on YouTube. Although 4k is gaining traction, 1080p is the next best thing.

It has a flipping touch screen, which is one of the best features of this camera for vloggers. Having a flipping screen allows you to record vlogs easily with one hand. As most of the vloggers are going to produce their content alone, it’s hard to set the frame and monitor the focus continuously without a flip-screen. The touch screen makes it easy to change settings on the go.

It has built in Wi-Fi with NFC which makes it extremely easy to transfer your files and watch your videos on TV wirelessly. It has a built in optical image stabilization which is extremely necessary for vloggers. As most of the time you are going to create videos while moving around and without the optical image stabilization your videos will not look great. It’s one of the most essential features for vloggers.

It has a 24mm wide angle lens which is again very helpful for vloggers who are going to create selfie videos. The wide lens allows you to create really good quality videos even at a closer distance.

On the flip side, the battery life isn’t great. The battery life of this camera is just around 265 shots, which is below average. Though you can easily carry a couple of batteries with you and you are good to go. The other downside of this camera is that it doesn’t have an external microphone jack, so you would have to purchase a portable microphone to have the best audio quality.

Overall it’s a really good vlogging camera for outdoor vloggers. If you are a daily vlogger then recording with a DSLR is not practical, as you would get tired holding that bulky camera everywhere. So if you’re looking for a smaller camera this could be a good option!

This camera is used by Jake Paul, Christian Guzman, Mark Dohner, fouseyTUBE, FunForLouis, and more. It has a really high ISO range, it goes from ISO 100 to 102400. Basically, the higher the ISO, the better the camera is in low light. Even though you start to see the noise from 25,600 ISO upwards, it’s still a really good camera for creating videos for YouTube. When you can film in 10-25,000 ISO it takes extremely beautiful low light shots without any noise.

This camera also has a great autofocus and 5 axis image stabilization system. The autofocus is really good, although it doesn’t perform that well in low light situations. This mirrorless camera also has a built-in viewfinder, and filming with this camera is made a lot easier with built-in focus peaking and exposure zebras. One of the biggest advantages of Sony A7SII is the ability to change the lens. You can change the lens with the help of the adapters.

One of the inherent disadvantages of the smaller form factor is a small battery. Here you get the battery life of only 370 shots, while on an average DSLR you can get around 1000 shots. Though the batteries are small and it’s not that hard to carry a couple of batteries with you.

This camera is a fantastic camera for vlogging or short films. Possibly the best on the market at this price range. The gorgeous 4K image, low light sensor, image stabilization and focus modes (while using a Sony E-Mount lens), built-in focus peaking and exposure zebras, a headphone jack, K2M-XLR microphone adapter, and electronic viewfinder make this a solid option for any production.

This is one of the best vlogging cameras out there and is used by many YouTubers like David Dobrik, KSI, Aspyn Ovard, FaZe Rug, and more. This camera is on the higher end of the spectrum. The main aim of this camera is to help you shoot really good images and videos. The weight of this camera is around 730 grams and it’s not portable by any means. But it’s perfect for creating videos in your setup. If you are vlogging about cooking, creating reaction videos, etc. then this camera is perfect for you.

You might be thinking, why not use the compact camera for creating indoor videos as well? But there is a huge difference in the video quality of the DSLR vs. a compact camera. The Canon 80D has a 24.2MP Dual Pixel CMOS sensor which can record up to 1080/60p (Full HD), which is the ideal resolution for creating videos on YouTube. It has built-in Wi-Fi which makes your life easier by allowing you to access and transfer files from your camera wirelessly.

It is one of the few DSLRs that has awesome video quality and also a flipping touch screen. Having a flipping screen, you can set the frame in seconds and also monitor the video being created continuously. It has an external microphone jack so you can upgrade your audio quality instantly. The battery life of this camera is really good, at 960 shots it will last easily for long hour shoots. But as the body of this camera is pretty heavy, you won’t be able to carry it around easily.

The only con with this camera is the weight and body size. At 730 grams it is not the most comfortable camera to shoot vlogs all day. So we recommend using a compact camera for creating your daily vlogs and to use a DSLR for creating your videos in your setup.

It is one of the best vlogging camera, hands down. It has almost all the essential features for vloggers and the performance of that features is outstanding too. If you are serious about vlogging and want to create high-quality videos like David Dobrik, KSI, and Aspyn Ovard then this camera is a really good choice for you.

This is one of the best compact cameras for vlogging. This camera is also used by hundreds of vloggers including RomanAtwood, Kwebbelkop, Jesse Wellens, DavidSoComedy, ilikeweylie, Trisha Paytas. It has a 20MP sensor and it can record up to 1080p videos.

It has built in optical image stabilization, flipping screen, Wi-Fi, electronic view finder and manual focus. The battery life of this camera is fairly good at around 320 shots. Though its recommended to carry a couple of extra batteries with you to be on the safer side.

The electronic view finder comes handy when you are shooting videos outdoors under sunlight and it’s difficult to see the image on screen. You can quickly snap out the view finder and have the perfect idea of the shot. It has a wide angle lens which will help you to shoot videos at a closer distance. The main “X Factor” of this camera is its size, it’s extremely portable and lightweight. The weight of the camera is just at 290 grams, which is even less than an empty coffee mug.

Overall it’s a really good premium compact camera that can at times also be used as your main camera. The overall video and image quality is fantastic and it’s packed with a ton of features that a vlogger would love.

The iPhone 11, for example, has a 12MP sensor on the rear camera, with optical image stabilization and dual-tone flash. You can create some really good videos with the rear camera. But if you are going to vlog, then using the front-facing camera will be easy, as you can see what you are filming. The front-facing camera also has a 12MP sensor and you can film up to 4k videos 60 FPS with the iPhone 11 as well.

The overall video quality is fairly good and it stands up pretty well against the lower end compact cameras. Though you would definitely see a huge difference in terms of quality when compared to a DSLR or a premium compact camera like the Sony CyberShot range.

Using an iPhone, you can start creating vlogs. But if you are really serious about your vlogging career then you should definitely invest in a high-end vlogging camera.

These were the five most common cameras used by YouTubers all around the world. You can select any of these cameras as per your personal preference and you are good to go. But ensure that either your camera has an external microphone jack or you have a portable microphone. Because the audio quality of your vlogs is more important than the video itself.

Most of the YouTubers use an external microphone to get crisp and clear audio for their voice. To reach their level you should start off with a good quality vlogging camera and an external microphone. This equipment will help you to create videos that match the standards of some of the most popular vloggers around the world. 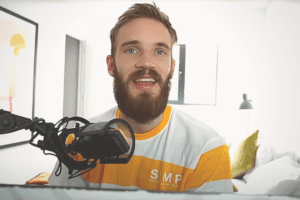 What Camera Does PewDiePie Use? 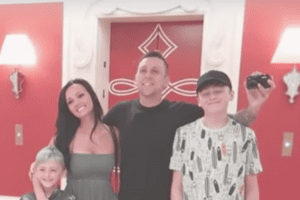