Picking the best lens for vlogging can be a TOUGH choice.

But, It doesn’t have to be though.

In today’s post, I will be going through what the best lens for vlogging is for Canon, Sony, Panasonic, and Nikon cameras, as well as tell you some of the best features to look for in a Vlog lens.

5 Specs to Look for in a Good Vlogging Lens:

This lens is fantastic, it is inexpensive (as camera equipment goes), light and easy to use and will fit on any APSC Canon DSLR camera (70D, 80D, 7D Mark II, etc).

One of the most popular vloggers on YouTube uses this lens combined with his Canon 80D.

If you have a crop sensor Canon DSLR camera and you want to start vlogging this is the go-to lens to start with.

The 10-18mm is the best lens for vlogging for APSC Canon DSLR’s. If you want the best vlogging lens for Full Frame Canon cameras then you will be much better of using this.

This is another fantastic lens from Canon. This lens might not be as lightweight as the 10-18mm that you see above but this is part of Canon’s Professional line up.

This Canon 16-35mm also has some nice features like weather sealing which means you do not have to worry too much about it if it happens to get a bit wet from rain etc.

If you’re just getting started with a Sony APSC camera, we recommend the standard kit lens. This is a really good lens considering the low price tag. With a focal length of 16mm to 50mm, the widest setting isn’t super-wide, but it’s definitely wide enough for vlog-style videos.

It also has OSS (Optical Steady Shot from Sony). So if your sony camera is lacking in-built stabilization then this OSS lens could be an ideal solution for you.

So the bottom line is that right out of the box this lens is a great lens to start your vlogging setup. And it’s definitely the most competitive price-wise and so worthwhile having it in your kit.

This is an excellent vlogging lens for Sony APSC cameras. The reason that it’s so good is that at 10mm, you get a nice super-wide shot that is really ideal for getting yourself and your surroundings in the frame. Then you also have the option to zoom into 18mm for getting more versatility in your shots.

The one downside of this lens though is the price, it’s not cheap. I think it’s worth the money once you’re ready for that upgrade from the kit lens. It really gives you that YouTube ultra-wide shot vibe that you might be looking for, while still having great picture quality.

This lens also has OSS (Optical Steady Shot), so it is a great all-around vlogging lens when walking around and talking.

Nikon needed a good inexpensive ultra-wide lens for their DX DSLR cameras and this 10-20mm lens is it.

The Nikon 10-20mm is lightweight, has near-silent autofocus, and is inexpensive.

One of the downsides of this particular lens is that it has no buttons, consequently, all the controls are in the camera’s menu system.

If you have a full-frame camera or you want to use the more “Professional” line up from Nikon then the Nikon 16-35mm F4 is the perfect lens for that.

This lens is by no means inexpensive but it is built well and has excellent image quality.

Just like the 16-35mm Canon lens, this lens is not as lightweight and small as the previous lens I spoke about. Having said that, it is built to be more durable for any condition.

This lens is a super wide-angle zoom lens with a constant F/4 aperture. It’s a useful vlogging lens for situations where you’re working in confined spaces, and as with most ultra-wide lenses, it’s easy to use handheld.

Usually, ultra-wide zoom lenses are quite big because they need to concentrate a lot of light, which requires a lot of glass. This lens, however, is quite a small lens. Even by micro four-thirds standards, it is really remarkably small.

It still has a very solid build quality to it though, the rear part of the lens is metal and the mount is metal. Other parts of the lens are plastic but these are really high-quality plastics. So overall I have no complaints about the build quality.

If you just want to carry one lens with you then this would be a great option. With its focal range of 14-140mm, it gives you excellent versatility.

One of the other things we love about this lens is its size, it’s really small when you consider the focal length.

This lens would be an excellent choice for a travel vlogger, as it gives you a lot of flexibility in the zoom without having to do quick lens changes. It also has the built-in stabilization which is a useful addition when you’re on the move.

So, whether you’re doing a talk-to-camera video or filming a new location this lens gives you that versatility and it definitely has an air of quality about it.

What Features to Look for in a Good Vlogging Lens

The camera sensor size can be a pain point when learning about cameras in general. Before we carry on you need to know that different sensor sizes might affect the type of lens that you want to be looking at.

There are two main sensor types that I want to talk about. One of them is the Full Frame sensor and the other is the APSC (known as a crop sensor) sized sensor. When you look at lenses you will see that each lens has a focal length or a focal length range. So you could find a lens that says it is a 50mm lens or a lens that says it is a 10-18mm lens. These numbers represent the focal length of the lens, the smaller the number the wider the lens is, the higher the number the more “zoom” the lens has.

When it comes to APSC sensors you will generally multiply the focal length of the lens by 1.5 or 1.6 depending on the brand of camera that you are using. For example, if you have a 50mm lens and you use that on a camera that has an APSC sized sensor then your equivalent focal length will actually be around 75mm(1.5x) to 80mm(1.6x). This is not an issue but you need to pay attention to this. Buying the wrong lens is an expensive mistake.

A prime lens is a lens that has a fixed focal length, meaning that you cannot zoom in or out. When I use the word “zoom” I do not mean see further away, I just mean you cannot change the lenses focal length.

These lenses generally allow for wider apertures which let in more light and will help if you are vlogging in darker areas.

Example of a prime lens:

A zoom lens is a lens that allows you to change the focal length by zooming in or out. Generally, if you buy a DLSR kit, you will get a kit lens with it. This kit lens might have a focal length of 18-55mm.

The drawback of zoom lenses is that they generally have smaller apertures and their apertures are not fixed/constant.

I discuss apertures in the apertures section below.

When looking at lenses you will see a number with “mm” next to it. That number is the focal length. Like I said before a small number means the lens is wider which will get more of the scene in the shot or video and the higher the number is the more it becomes a telephoto lens, meaning it will allow you to see things that are far away.

Generally when Vlogging you want a wider angle zoom lens. When I say “zoom” in this context I mean the ability to change the lens’s focal length. It is always useful to be able to change the focal length while vlogging. When you are vlogging normally you might want to have the lens at its widest possible focal length and then when you want to have more emphasis, you can zoom in. In general, it is better to use a wide-angle zoom lens.

Having said that you might still want to look at prime lenses or fixed focal length lenses. These are generally sharper in terms of image quality and usually have wider apertures, which produces a shallower depth of field and can help separate you from the background. They can also allow you to have better “bokeh”.

Having said all of this, I would suggest going with a wide-angle zoom lens for your first vlogging lens. Something along the lines of a 10-18mm lens.

When picking a vlogging lens one needs to consider aperture but it is not as important as it would be in photography.

The aperture of a lens basically controls how much light the lens lets in. The wider the aperture the more light it will let in which can help when you are vlogging indoors or in a dark area.

A vlogging lens generally doesn’t need a wide aperture. When looking for a lens make sure that it has an aperture within the range of 3.5 – 5.6. What this means is that when your lens is at its widest zoom the widest aperture of the lens will be 3.5 and when you are fully zoomed in then the widest aperture will be 5.6.

Don’t let these numbers scare you. When you are looking for a vlogging lens, most of the lenses will be in this range.

This exposure chart will help you visualize how aperture or f-stop value changes the aperture of a lens.

This is a very short but very important point when picking a lens to vlog with. Make sure that it has IS (image stabilization). When you are vlogging you will be moving around a lot and shaky video is not enjoyable to watch.

Image stabilization will help smooth out the video while you are recording it, making editing the videos easier.

This is another very important feature to look for when picking out a lens. Most lenses have autofocus for photography.

This does not mean that the autofocus will work in video. This is not only a lens issue. Your camera might not support autofocus during video mode with some lenses. So when picking up a lens, make sure that your camera will be able to use the lenses autofocus feature while recording video.

All of these lenses are fantastic lenses for vlogging. And your decision on which to choose comes down to what brand of camera you’re using and what type of vlogging you’re doing.

If you need help finding the best vlogging camera for your vlog, check out our: Best Vlogging Cameras. 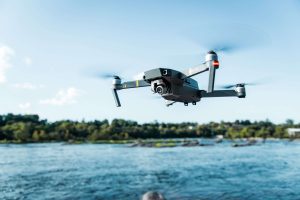 5 Best Drones Under $200 For Vlogging 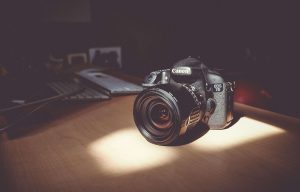 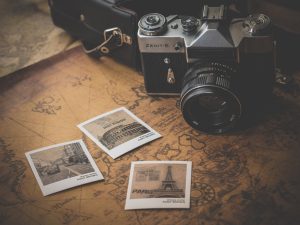 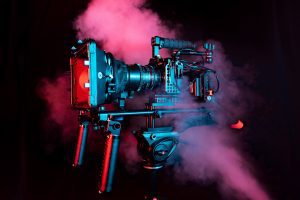 5 Best Tools to Add to Your Vlogging Kit