Vlogging has increased in popularity quite a bit in the last few years. This is due in part to vlogging actually becoming a full-time income for many people. Once others started seeing how much could be made by vlogging, more and more people started doing it. Not only that, but the cost of some of the equipment has gone down, the tutorials online have gone up, and the exposure to the business as a whole has increased as well. All of these things have contributed to the increase in vlogs and vlogging knowledge.

Contents show
What is a Vlog?
Vlog definition:
What does Vlogging mean?
What Is A Vlogger?
History of vlogging
Why Vlogging is so popular?
How to Make a Vlog
Vlogging Tips for Beginners
Get Started Today
Relax
Start Filming
Ask for Help
Be Ready to Adapt

What is a Vlog?

A vlog is a blog in video format, rather than text or images. The word vlog originated from the word blog itself. Vlog stands for Video Blog or Video Log.

Blogging is where a person writes an article to give advice, teach something, or just talking about their feelings. So a vlog would be doing this same thing but filming the entire thing instead of writing it.

What does Vlogging mean?

Vlogging is the process of filming your vlog. For example, the film is when you’ve recorded something, but filming is the act of you doing it. That is exactly what vlogging is in relation to a vlog.

Today the most popular platform for Vlogging is undoubtedly YouTube. People are vlogging their daily lives on YouTube to their millions of fans. There are vloggers in many different genres like gaming, beauty, food, travel, etc.

What Is A Vlogger?

A vlogger is someone who makes vlogs. So if you have made a video blog and posted it on the internet then you’re a vlogger.

The first-ever vlog was created on 2nd January 2000 by Adam Kontras. He created this vlog to inform about his cross country move to Los Angeles from Missouri.

Many people vlogged from 2000 to 2005, but it was still not that popular. As video hosting sites at that time would charge for bandwidth to the uploader. So every time your video went viral you would lose a substantial amount of money.

But in February 2005 YouTube was founded. Which allowed free video hosting to everybody. This completely changed the landscape for vloggers. It became popular overnight and by June 2006 YouTube was the fifth most popular website on the Internet.

Why Vlogging is so popular?

Vlogging is a totally new type of concept. For example, people love watching beauty vlogs rather than conventional beauty tips. Because while watching vlogs you create a personal connection with the vlogger, which is not possible in the conventional medium.

Entertainment – This is one of the main reasons why vlogging is so popular. People are really entertained with vlogs. It creates a personal intimate connection with the viewers. And when they create entertaining content it’s really powerful.

You are more likely to laugh from a bad joke through a person you know than a stranger because you are emotionally attached to them. This is what vlogging is all about.

Human Connection – While watching vlogs people create a human connection with the vlogger. It’s a fun and easy way to connect with other people. As they start seeing the life of the vlogger, they feel personally invested in their life. And this connection makes them a lifelong subscriber.

Escape from reality – We all are either stressed out of our job, or hate school, or have a family crisis of one sort or the other at some point in life. Escaping from reality gives us an explainable joy and a peace of mind.

Watching vlogs allows us to join a virtual family and be a part of it. We can travel the world with them, we can see the different cultures of the world, etc. from the comfort of our home.

How to Make a Vlog

In order to become a vlogger you just need to start filming and publishing your videos online. This is pretty easy to do, but most people don’t feel comfortable getting in front of a camera. It doesn’t matter what it is that you are thinking about recording, just try it and see how it feels. The more you vlog the easier and more comfortable it will become. Trust me, becoming a vlogger is not as hard as many people make it out to be.

Getting started is really the hardest part about vlogging. Most people don’t think that they can do it, so they just don’t try. Many people assume that nobody will watch their videos, so they don’t record anything. And many people think that it won’t amount to anything, so they give up before they even try. Don’t give up, get started today, grab your vlogging camera and start filming.

Be Ready to Adapt

When you start vlogging you might have a clear vision as to what you want to vlog about, but that might change. When most vloggers start they start off knowing very little and then as they learn their channel begins to adapt. Be ready to adapt because chances are you will need to at some point.

Vlogging is very simple once you get started, but you will never know that if you never get started. Now that you know what vlogging is and how to begin vlogging, it is time that you give it a shot. 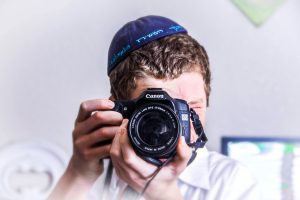